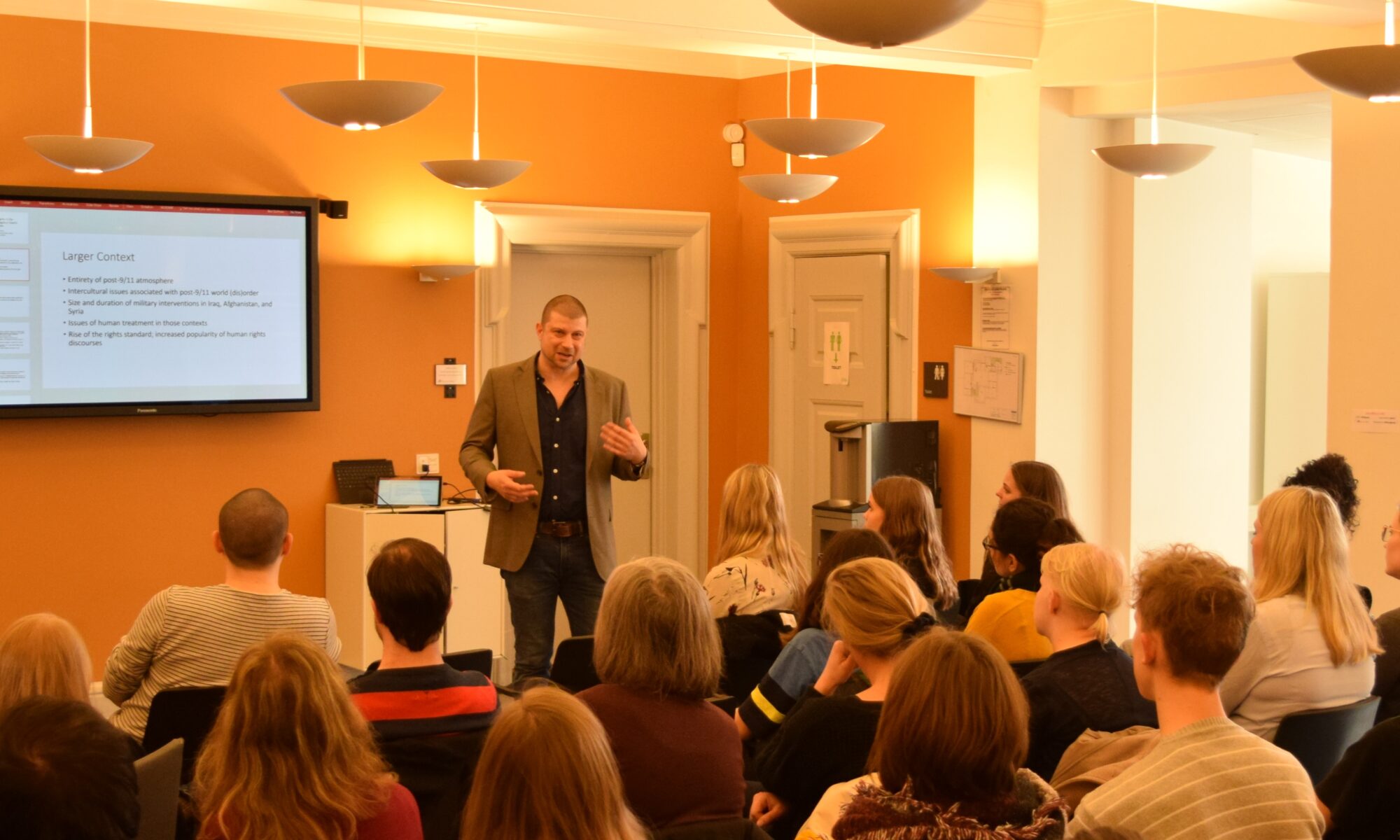 In the last event UNYA Aalborg organized on April 5th, together with SILBA, Ben Dorfman provided a discussion on human right issues in the fight against the Islamic State (IS, also known as ISIS, ISIL, or Daesh).

Ben Dorfman is an associate professor at the Institute for Culture and Global Studies at Aalborg University. He holds a Ph.D. in History and is actively researching in the fields of human rights and history. Recently, he published 13 Acts of Academic Journalism and Historical Commentary on Human Rights: Opinions, Interventions and the Torsions of Politics, a book presenting human rights concepts through concrete analyses of international conflicts, social justice issues, and historical scenes in the form of successive essays aimed at students, academics, and the broader public.

As we were reminded by Prof. Dorfman, ‘human rights’ and associated concepts all boil down to a simple thing: the way humans treat — and are treated by — one another. Discussions around such issues ultimately address the case of human beings, their lives, feelings, and suffering.

A global frame for human rights may be found in the terms of the UN Declaration of Human Rights (UDHR, a more principles-based text) and documents like the International Covenant on Civil and Political Rights (ICCPR, having more legal value). Other frameworks, such as the European Convention on Human Rights, are also important.

The talk started by a historical perspective and clarification of the context, starting from the 9/11 events in 2001, military operation of US and allies in Afghanistan and Iraq, and, especially, the further occupation of Iraq. The historical perspective was important to Prof. Dorfman, who clearly stated that, “as citizens, we have a duty to learning where the issues we face come from”. However, he insisted that historical understanding neither grants legitimacy to the violation of human rights, nor supports claims of cultural self-determination as a basis for violence. Instead, the historical perspective helps underline the humanity of the situations in which we find ourselves, and provides grounds for reflection on how to solve international tension.

The growth of IS in Iraq and Syria was facilitated by a lack of coordination in the opposition to Bashar Al-Assad, and problems in the administration of post-War Iraq and the civil conflicts therein. Prof. Dorfman also pointed out that IS has been very effective at marketing itself as being ‘the real fighters’ against ‘the West’.  These messages have massively, together with Western stereotypes, have helped extremist groups win political points, especially among young people.

The US and allies, as well as Russia (where it was reminded that the vast majority of bombing campaigns in Syria have not targeted IS) challenge the right to life with those bombing campaigns, perhaps especially of civilians. Cases of disrespectful treatments of prisoners by US soldiers (e.g. the case of the Abu Ghraib prison, of which pictures were extensively distributed) were also mentioned as breaches of the right to avoid degrading treatment and punishment and having provided IS with further material for propaganda.

Meanwhile, IS has responded with cruel and inhuman actions themselves, such as beheadings of journalists and aid workers, where the video footage has been shared online. IS has also pushed for terror attacks especially in the West, employing the ideologies of “individual jihad” and “low-cost terrorism” which date to Al-Qaeda.

Allied airstrikes have by far killed more people than IS terrorism. However, in the West and perhaps globally, terrorism and the related digital footage have a greater psychological impact. Prof. Dorfman illustrated this with some deeply shocking video footage from IS, together with an important reminder that “bombings can violate human rights and challenge the right to life as much as beheadings and terrorism – they just don’t work out visually in the same way”. In each case, human beings are directly affected by these actions.

The talk was followed by a series of questions and answers from the audience. The discussion revolved around the issues of validity of use of force out of human rights concerns, asymmetrical warfare (like distant drone attacks and airstrikes), and potential approaches to solve the conflict.

When it comes to the validity of the usage of force, the audience was encouraged to remember that “killing in any context is theoretically a human right violation”. In the context of the fight against IS, it seems clear that both intervention and non-intervention have led to undesirable outcomes. Honesty about the risk of rights violations with intervention and the human costs that will result from decisions to intervene appears essential – that so the terms of intervention are understood; and that also because intervention is clearly necessary sometimes to prevent further rights violations. As reminded by Prof. Dorfman, a framework for the derogation of rights in times of emergency exists (e.g. ICCPR article 4), although invocation of derogation requires serious reflection. As Dorfman argued, derogating rights the situation should not lead us too far from the spirit of rights principles: “I think it’s important to put idealism front and centre, and assure honesty in our actions so as to minimalize senses of marginalization and the idea that rights standards are to be used as a weapon against anyone”.

Regarding marginalisation, Prof. Dorfman suggest that a way forward could have consisted of, and perhaps should still consist of, bringing groups like IS to the negotiating table so as to hear their claims. This could allow us to distinguishing between legitimate claims, and purely destructive anger and raw grabs for power. Dialogue would ­– of course ­– be a difficult step, as negotiating with those we consider evil can be hard. However, it could also lead to defusing the power of the organisation, or changing its character.

The discussion session was also an occasion for Prof. Dorfman to remind the audience of a number of essential points when it comes to human rights. Firstly, that security is an important enabler of human rights, but is not their end goal (which is allowing humans to live fulfilling lives).  Secondly, creating a hierarchy on human rights is undesirable, as all should be considered important – that though the right to life does seem fundamental. Thirdly, the issues at stake are complex and it is essential to look behind appearances and simplistic messages. Lastly, an essential dimension of promoting human rights is dialogue, which may require inviting partners we dislike or oppose to the table so that they have a chance to express themselves – that so we can give a fair hearing to the human community with which we have to deal, have attempt to tamp down the most inflammatory political claims or, at least, claim we have listened before we begin to bomb.

[Thanks to Dominika Floriánová and Michaela Higgins Sørensen for the kind feedback on the first version of the article, as well as Prof. Ben Dorfman for the talk and contribution.]

One Reply to “Human Rights in the Action Against ISIS, with Associate Professor Ben Dorfman”