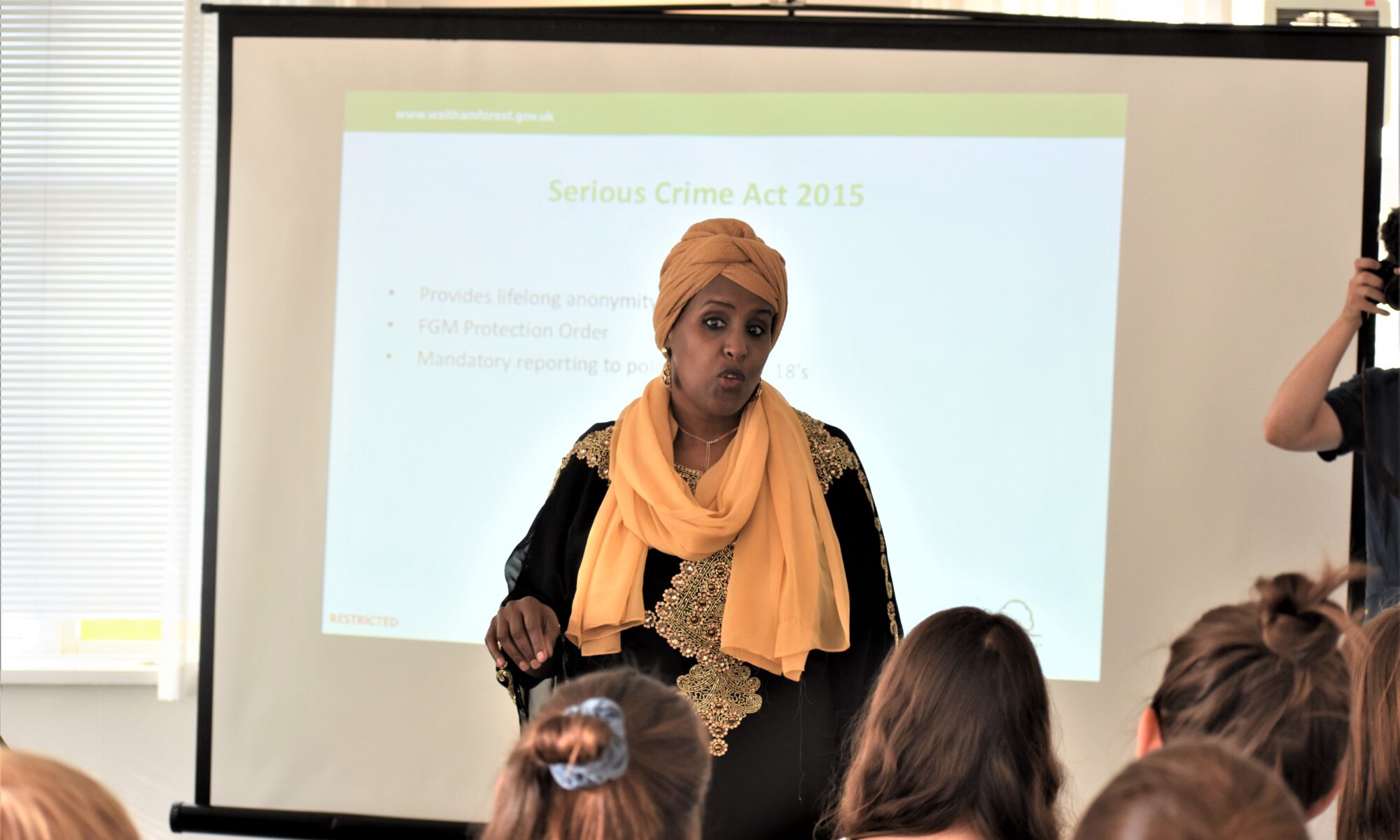 Female Genital Mutilation (FGM) is a procedure that involves partial or total removal of the external female sex organ for non-medical reasons. There are four types, the first being the ‘clitoriecotomy’ where partial or total removal of the clitoris takes place, and in rare cases, the skin that folds around the clitoris, too. The second type is called ‘excision’ and is the partial or total removal of the clitoris and the labia minora. The third, and most severe kind, is called ‘infibulation’ which involves the narrowing of the vaginal opening. Infibulation can involve the removal of the clitoris and repositions the inner and outer labia in order to stitch up the vagina from top to bottom, sometimes held together with thorns. The fourth kind includes any other harmful procedures to the vagina, such as piercing, pricking, scraping or cauterizing the genital area. Furthermore, FGM is a cultural practice and is not tied to religion as it predates today’s religions whose religious scriptures do not advocate the practice.

FGM is mainly thought to happen in 28 African countries and parts of Asia, however, it is a transcultural phenomenon due to migration. In the EU it is estimated that half a million girls and women are victims of this practice. “FGM is not just a problem of the third world, there are hundreds of thousands of young girls who fall victim to it in Europe alone, not to mention America or Australia”, stated Hibo Wardere who is an FGM campaigner in the UK.

Originally from Somalia, Wardere fell victim to FGM when she was just 6 years of age and underwent infibulation.“It took me nearly 3 decades to talk about what happened to me. I was so ashamed, but after an incident when a young girl fell victim to FGM from the school I was working at, I knew I couldn’t keep silent anymore. I had to be brave and fight for her and girls like myself”, explained Wardere. Wardere fled Somalia during the civil war in the 1980’s and moved to the UK when she was 18 years old. She met her Somalian husband there and is happily married with 7 children today. Her mission is to fight against FGM and to educate people to end this form of ‘child abuse’, as she labels it.

FGM has no medical reasons and has numerous health risks attached to it. The risks include the likes of hemorrhaging due to blood loss, severe pain and shock from the trauma of the procedure, urine retention, injury to the skin tissue and infection, and can ultimately result in death. The post-procedure complications are heavily consequential, some remaining with the woman for life. Women can experience difficulty when urinating, namely in infibulation, as the hole is too small for urine to pass. Furthermore, when FGM victims menstruate, there are many complications as the blood can clot and cysts can form, causing periods to be painful and difficult. Sexual complications are likely to arise, both physical and phycological. Women run the risk of becoming infertile due to cyst formations and chronic infections in the affected area, too.

Childbirth is particularly troublesome and potentially deadly for FGM victims, if not handled properly, as possible obstructed labour can occur. Additionally, FGM victims are more likely to be hesitant to visit the gynecologist or obstetrician as they are ashamed or too afraid to do so, and in rural areas, women don’t have access to adequate care. “When my first son was born, in the UK, I was terrified. I didn’t want to go to the doctor, I was ashamed, but when I went into labour, I realized I had to. I remember laying in the chair and seeing the doctor’s eyes widen. He called all the midwives and doctors on the floor to have a look at my vagina as if I was some animal at the zoo. It was one of the worst feelings in my life that I can still clearly remember to this day. And just imagine, in my village in Somalia, the same woman who cut you will most likely deliver your child. It is absolutely traumatizing!” recalls Wardere.

When it comes to the psychological consequences of FGM, Wardere stated that, “they are enormous! Women live with them for the rest of their lives, once the procedure is done it can never be reversed. I still have flashbacks to this day, sometimes I wake up in the middle of the night in terror. Women are permanently traumatized afterwards, and don’t forget about the anger and feelings of betrayal by your own parents. I was an angry teenager, I could not understand how my own mother could let this happen to me“.

Relationship issues are also part of the package as “many women never feel sexual pleasure, and the men don’t understand why. It’s so ironic when you think about it, many men in FGM practicing communities won’t touch a woman who has not been cut as she is seen as not pure enough and unclean, not even as a woman in fact. Then after marriage, when the woman doesn’t want sex because it is too painful or traumatizing, they leave her for another woman! What is that?” explained an indignant Wardere.

FGM is deeply ingrained in many cultures and societies and is linked to women’s honour and marriageability. In poorer countries where FGM is predominantly practiced, women are economically dependent on men, therefore marriage is a priority. To be eligible for marriage, a woman has to be seen as pure, a virgin, honourable, not promiscuous and clean, and FGM is a way of “controlling a women’s sexuality to please men”, as Wardere put it. The practice is so ingrained in FGM practicing communities’ culture that it survives transnational migration. This is why the United Nations Youth Association in Aalborg took the initiative to create an event on the issue, inviting Hibo Wardere from the UK to educate us on the matter. We believe that FGM is an issue for all humanity to care about as it is one of the most severe kinds of child abuse. We hope to raise awareness on the issue in Denmark as there are an estimated 20,000 women at risk of FGM living in Denmark, yet there is little discussion on the matter.

So, what can you do? Educate yourself on the issue, spread the word and be a part of the fight to end FGM! Below is a list of potential ‘warning signs’ to look out for in potential FGM victims, who are young girls ages 3-18, particularly from FGM practicing countries. You can also read Hibo Wardere’s book, Cut: One Woman’s Fight Against FGM in Britain Today for further information.

Warning signs of FGM according to Wardere: