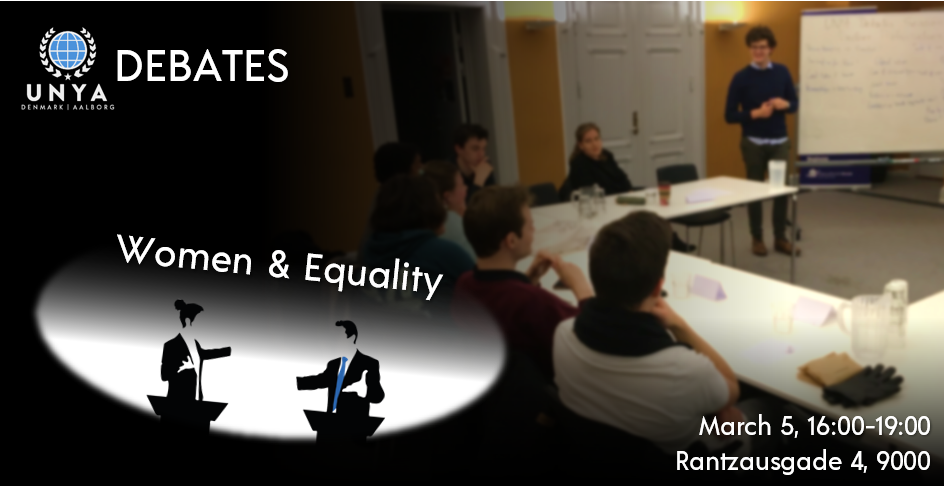 Spirits were high as the second UNYA Debates of the year took place on Tuesday the 4th of March in the International House of Aalborg. UNYA Debates provides a platform in which anyone is free to present their opinion on the given topic and have it contested in a comfortable and open-minded environment. The topic of this debate was ‘Gender and Equality,’ a topic which all participants were able to relate to personally and therefore eager to debate.

Despite the calm and collected beginning, the debate quickly picked up as more opinions were thrown on the table. Over the course of three hours, a broad variety of issues and conflicts were covered, taking as the point of departure the United Nations’ Sustainable Development Goals number 5, Gender Equality, and 10, Reduced Inequalities, while also slightly touching upon goal number 1, No Poverty, and number 4, Quality Education. The various goals covered within one topic shows how interrelated the Sustainable Development Goals are and prove that one cannot speak of nor attempt to solve one goal without taking into account the other goals and their progress. The participants of the debate thus quickly discovered that gender equality cannot be achieved without addressing poverty and education, among other goals, leading to a debate covering several diverse areas, in one way or the other, related to Gender and Equality.

One of the main topics during the debate was the notion that gender inequality is embedded within our societies to the extent that children are streamlined into the fixed gender binaries of ‘boys’ and ‘girls’ before they are able to think an independent thought. As children grow up, it becomes increasingly difficult to break out of the societal expectations connected to these predetermined gender roles. The majority of people do not wish to become an outsider and, hence, tend to tread in the footsteps of others, thus conforming to historically influenced gender roles. Therefore, the participants agreed that we should work towards gender neutralizing the influences which children are exposed to on a daily basis, that being for instance advertisements for clothes and toys.

Amongst the topics which peaked the interest of the participants were the issues connected to the way in which gender inequality is addressed in public debates. New gender-neutral pronouns may be added for people who do not identify as a specific gender, but that does not necessarily address the problem in which such people are excluded from society because of how they identify themselves. The debate concluded that focus should rather be on achieving equal payments and equal access to any job no matter one’s gender. There should be an increased focus on addressing the roots of a problem because it cannot be covered up by new words as these issues will keep recurring in society. That being said, the issue of gender identification and the importance of using gender-neutral terms in order to include the various members of the LGBTQ community cannot be undervalued. In other words, it is important to have an inclusive society for all LGBTQ members, but in order to have that and get to that level of gender equality in our society, we need to focus on the roots of the problem.

The debate ended with the participants attempting to provide solutions to the problems connected to Gender and Equality. The most popular solution was a call for equal access to information and education on anything from sanitation to skill training and preparing for jobs. Basic health and other fundamental Human Rights have to be attended to before we are fully able to tackle the gender equality issue. After the last words had been uttered, the participants had a lot of food for thought and left feeling motivated to give another push towards gender equality.