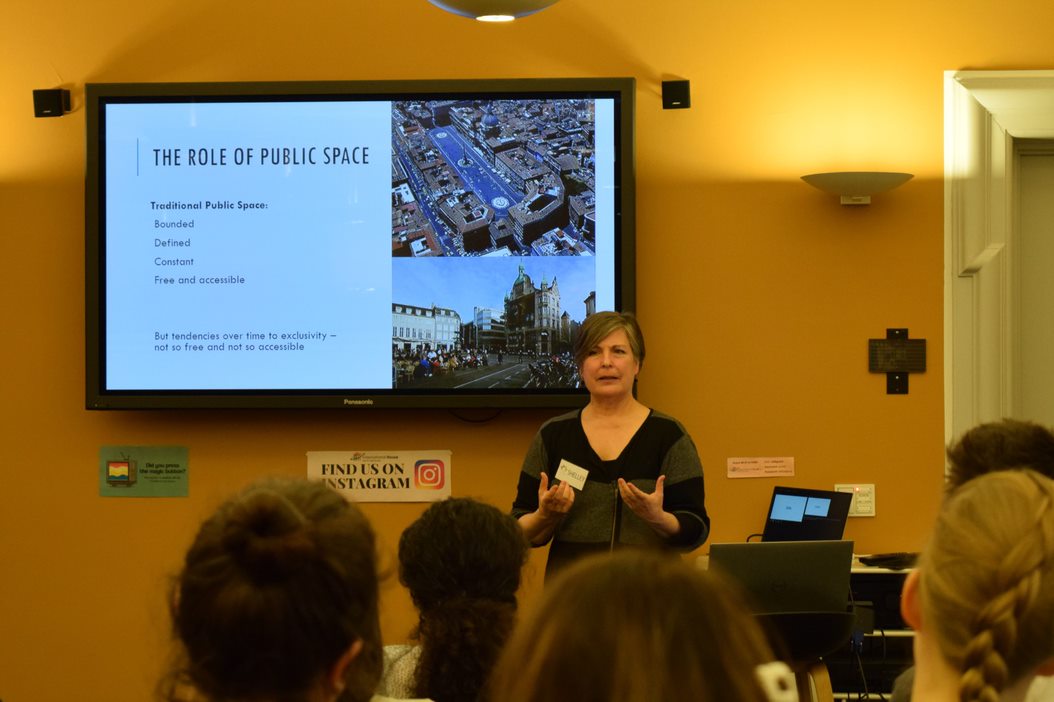 Collective Active was represented by Andrea Victoria Hernandez Bueno, Ditte Bendix Lanng, Lydia Oehlwein and Shelley Robin Smith. All of them pointed out the importance of creating a sense of community and empowering people when it comes to the design of urban spaces.

“The city is not a product, nor a result of a well-considered plan. It is a story, plotted through time with ever-changing conditions, and is written by its residents”- Collective Active

“People can create more together than on their own”, said Lydia Oehlwein.  On this basis, the group ‘Collective Active’ was founded. Collective Active is a group of urban designers from AAU advocating a people-driven approach to urban design. When citizens contribute to create the urban spaces and take care of them, their sense of ownership of the urban spaces will increase; people will enjoy and value them even more. If the locals, for example by creating community gardens, manage parts of the public spaces, the connection between the community and the city can increase. This means that the city depends on multiple factors and stakeholders, ever changing and organically growing. As Lydia mentioned, “the urban dynamic is not something fixed, it is really dynamic”.

In 2017, Aalborg University celebrated 20 years of urban design by publishing a kaleidoscope with essays and illustrations of students, graduates and faculty members. The role of an urban designer is defined in the book as creating inclusive, liveable and climate-resilient spaces for our communities. Collective Active contributed with a list of their ‘Matters of Concern’[1]to this publication. These matters question the role of urban designers. One of them reads as following: “The city is not a product, nor a result of a well-considered plan. It is a story, plotted through time with ever-changing conditions, and is written by its residents”.

“People can create more together than on their own”- Lydia Oehlwein

Shelley Smith underlined that people have become more private as a result of ‘living vertically’, and their hectic urban lives. These things have created a situation in which people are not as visible to one another and have much less contact with each other. By designing, or redesigning, spaces where inhabitants meet more often, it is more likely they will have a deeper sense of community.  By simply seeing each other, people will have the opportunity to accept differences and find ways in which they share things, for example, children that can play together. In fact, visual contact and spaces of interaction are two essential dimensions of urban design.

When it comes to public spaces, these should be designed to be accessible for everyone, to be inclusive. However, nowadays, there are public spaces divided by transportation methods: one for cars, one for bikes and one for pedestrians. The last mentioned is oftentimes used by restaurants and cafés, where businesses occupy the space for its customers. If the only space pedestrians can use in the public space is given to private sector, then it becomes exclusive

Social interaction is at the heart of Collective Active’s focus, which contrasts with the widespread top-down approach where urban design can be very disconnected from the community that will interact with its outcome. After all, in the world of socially active designers, urban design is about giving people a voice.